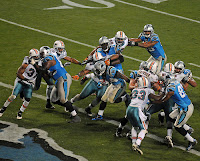 In the Buccaneers-Redskins game this past Sunday, the Redskins were able to score a potentially game-tying touchdown at the end of regulation, only to fail to hit the extra point due to a mishandled snap. Gregg Easterbrook suggested the Redskins should have gone for the two-point conversion, which is a plausible strategy in many circumstances. But Easterbrook went on to add this little tidbit: "Rushing deuce attempts are about 65 percent successful in the NFL -- a better proposition than the 50/50 of advancing to overtime."

It's well established that 2-point conversion attempts are successful slightly less than 50% of the time, so could the 65% number for runs possibly be true? If so, what would that mean for NFL strategy?

There have been 718 2-point conversion attempts from 2000-2009, including playoff games. Overall, they've been successful 46.3% of the time. But this is slightly misleading because it includes aborted kick attempts. If we weed those out, along with some other mysterious plays, such as Josh McCown's kneel-down while trailing by 5 points in the final few seconds of the Cardinals-Vikings 2003 game, we get a different answer. For all normal 2-point conversions, the success rate is 47.9%.

Now look at the success rate broken out by play type:

Running plays have been successful nearly 62% of the time. So Easterbrook's number is very close, the difference likely due to the span of years he looked at.

This is a classic football game theory problem. Despite being significantly more successful than passing, running plays are much less frequent. It's clear that offenses should be running more often and defenses should be more biased against the pass. We can't tell exactly what run/pass ratio is optimum from these numbers, but the equilibrium will occur when the success rates for running and passing equalize.

Unfortunately, it's not that simple. Many of those runs are QB scrambles or bootleg options. If we remove all the plays in which the QB is credited for the run and just look at conventional runs we get the following:


QB runs are successful a whopping 75% of the time, but the picture is still muddled. Often QBs will sprint for the end zone only when they sense they have a good chance, so there's likely a considerable amount of bias in that number. And only when they happen to be tackled between the 2-yard line and the end zone would the attempt be recorded as an unsuccessful run. If they're tackled behind the line of scrimmage it probably gets recorded as a sack, which is considered a pass play.

Still, even after removing all QB runs, conventional RB runs are successful 57% of the time. This suggests that if teams ran more often, the overall success rate would increase. Defenses would likely respond, and eventually the success rates for both running and passing would equalize at a success rate somewhat over 50%.

If true, this would mean that going for the 2-point conversion is a net positive expected-value play. In 2009, the success rate for extra point kicks was 98.3%, and so far in 2010 it's 98.8%. So for 2-point conversions to be the higher expected-value play, it would only need to be successful about 49.5% of the time. A strategy mix that's heavy on running would almost certainly exceed that rate.

These results tend to confirm the previous finding that teams should generally be running more often inside the 10-yard line.

So should coaches go for 2 more often than not? Perhaps. The score and time remaining would ultimately dictate the strategy in each situation, but as long as the game is a point-maximization contest, which is usually until the end of the 3rd quarter, I'd say it's good idea. And in the end-game, when an extra point ties, but a 2-point conversion takes the lead, it would almost certainly be a good idea, all other things being equal.

Think how much more exciting every touchdown would be if there was almost always a 2-point conversion attempt. Unfortunately, I doubt coaches would do it. They're so risk-averse, it would take a success rate considerably higher than 50% to convince them to adopt a more aggressive strategy.
Brian Burke